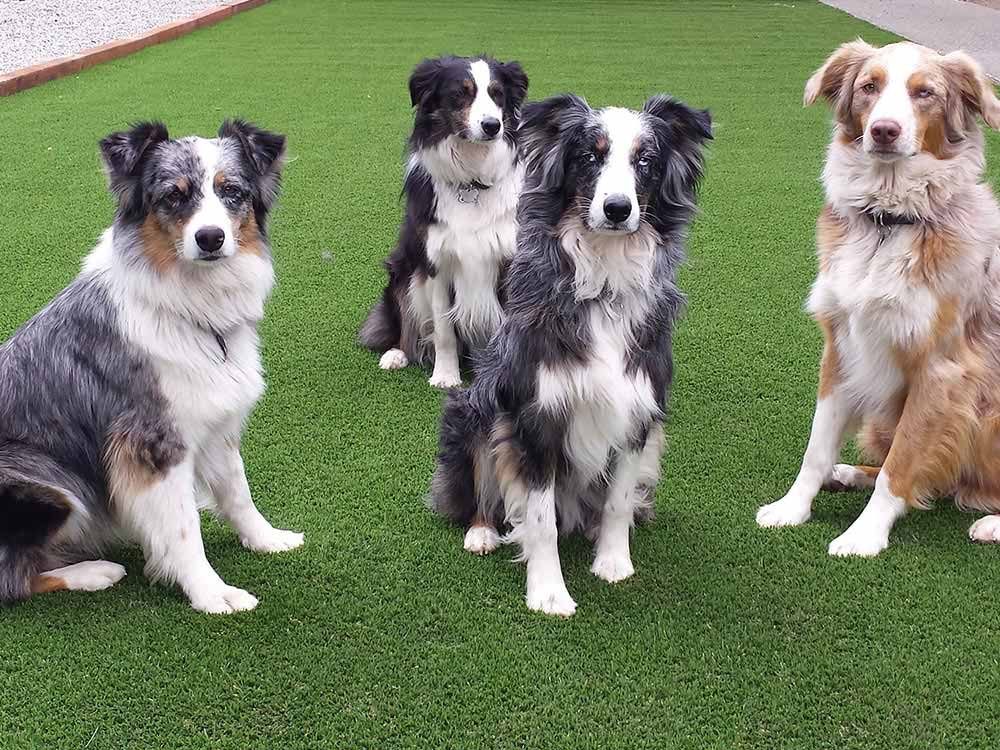 Listen up you guys and girls on artificial turf

Not that Forbes was fat — but he’s not

The 5-week-old pet hotel brings a new concept to the St. Louis area, according to Steve Keller, who owns the operation with his “business and life partner,” Debee Alex.

The hotel is “the first cageless, crateless dog-boarding and day-care facility in the area,” Keller believes. It’s an outgrowth of the couple’s 8-year-old pet-sitting business, Happy Tails Inc.

The open environment is what Forbes’ owner, Mary Hoke of west St. Louis County, likes best about the facility. “Forbes isn’t confined to a kennel,” she said. “He’s always out and about, just like he is at home.”

Happy Tails’ red-roofed building at 2920 North Lindbergh Boulevard in St. Ann looks smaller than its 10,000 square feet, in part because the lower level can’t be seen from the front. With three oversized play yards outside and three large playrooms inside, the hotel boasts 16,500 square feet of cavorting space for fun-loving canines.

Tuckered-out terriers can nap on one of the miniature sofas or pet cots that dot the playrooms. Or if they prefer the security of their own space, they can retreat to one of the fenced-off areas along the walls. Should one of the romping Rovers take issue with one of his pooch playmates, a fenced cubicle also can be pressed into service for some temporary doggy timeout.

Doggy disagreements can be expected on occasion, but constant supervision by one of Happy Tails’ 30-plus employees helps keep them to a minimum. Other measures also add to the one-big-happy-environment. For example:

Dogs are separated by The upstairs playroom is for small dogs, with the downstairs rooms for medium and large dogs.

Each new arrival enters a play group A fenced-off get-acquainted area separates the newcomer from the group while allowing the dogs to get to know one another nose to nose.

Soothing doggy music plays round-the-clock. “The music was designed specifically for dogs,” Keller “The loudness and the notes are in their particular comfort range. There are no high highs and no low lows. I think definitely it’s calming for the dogs,” he said, “and some of our employees have said it relaxes them, too.”

The colors also have a calming effect, according to Keller, who noted that the walls are painted a pale pastel green called daiquiri ice, the upstairs flooring a deeper green called guacamole and Additionally, the colors add to the outdoor feel of the interior, which comes complete with park benches, as well as street signs pointing the way to places such as Spa Street, Peaceful Place and Check-In Court.

Chronically unfriendly canines aren’t welcome at Happy Tails For the most part, neither are un-spayed or un-neutered adult dogs. That rule is not just in the interest of preventing unwanted puppies, but also because un-neutered dogs tend to be more aggressive than neutered ones. “Statistically, something like 80 percent of all dogfights involve an un-neutered dog,” Keller said. “One of the very first things we tell people is that Happy Tails is not for every dog, but it’s for the majority of dogs,” Keller said. “An aggressive dog obviously won’t work in this kind of environment, but a really shy dog may not work here, either.”

To help ensure that a dog is suited to its liberated group lifestyle, Happy Tails requires that every canine client goes through an orientation before its first “In other words, if you’re a new client who calls this morning with a dog you want to bring in for boarding this afternoon, we’ll tell you no,” Keller said. “You have to bring your dog in ahead of time so that we can acquaint you with the facility, have you fill out all the paperwork and put your dog through an evaluation process to see if he has the temperament to be in this type of environment.”

One of the perks for dogs who make the grade at Happy Tails is the oversized outdoor play yards with their vibrant green lawns – ProGreen Synthetic Lawns, that is. The comfy, foot-friendly surface is ingeniously planted atop layers of weed-barrier fabric, crushed limestone and sand to create an odor- and bacteria-killing drainage system.

Another plus is that unlike most boarding kennels, Happy Tails is open 24 hours a day, every day of the year. That doesn’t just mean it’s staffed around the clock, Keller said, “it means you can drop off or pick up your pet any time of the day or night. If you have to work late or you have a late flight, you don’t have to wait until the next day to pick up your pet.”

Also, because dogs are free to play as much as they like, there are no extra charges for additional play times. Happy Tails charges a flat $25-a-day fee for long-term boarding; for its “stay and play” day care, it charges $20 a day if your dog comes once a week, $16 a day for two days or more. For more information, call 314-995-7297.